Chiara Saccone was born in 1985 in Florence.

She is a pianist specialized in contemporary music, although she plays all types of classical music – especially music from the early 1900s, as soloist and in ensembles. In the last few years she met and worked with composers like Helmut Lachenmann, Beat Furrer, Simon Steen Andersen, Frederic Rzewski, Vinko Globokar, Wolfgang Rihm, Sofia Gubaidulina, Jennifer Walshe and Francesco Filidei.

She gives recitals as soloist and with ensemble. Since 2014 she has performed with the soprano Letizia Dei, focusing on the repertoire for voice and piano of the 1900s. She regularly plays in duo with the guitarist Ruben Mattia Santorsa. Together with the clarinetist Chiara Percivati she founded the duo Toolbox, specialized on scores where non-musical elements are equal to sound or even substitute it. 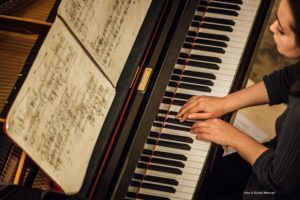 She attended the Impuls Academy in Graz in 2013 and the Internationale Ferienkurse Darmstadt 2014. She attended the Master of Contemporary Art Performance at the Musik Hochschule of Luzern graduating in 2013 and won the scholarship “Swiss Government Excellence” for the years 2012-2013, which is conferred to the best students who have been admitted to a Swiss university. In 2010 she attended the Master of Chamber Music graduating cum laude at the Conservatorio Frescobaldi of Ferrara.
During the Erasmus at the Hochschule Musik in Trossingen, she begun to be involved in contemporary music. From 2008 to 2010 she was pianist in the Orchestra Giovanile Italiana. Meanwhile, she attended a three-year advanced course with pianist Paolo Bordoni at the Accademia Musicale Pescarese.
Since she was a child she attended piano classes at Scuola di Musica di Fiesole with Maria Grazia Cantelli and graduated with the maximum note at the Istituto Musicale Pareggiato of Livorno in 2006.